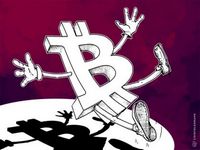 November 8, bitcoin traded at 7882 USD, and on November 12, according to CoinDesk, the rate of crypto-currencies in the course of trading fell to 5617 USD

By Monday morning, bitcoin partially played losses and traded at $6,414 - 9.5% more than the closing of previous trades.

Over the past six months, this is the third sharp drop in the bitcoin rate. In July, this crypto currency at a certain point lost 38% of the cost, and in September - 40%. After the fall, the bitcoin rate returned to growth and updated the historical highs.

The volatility of Bitcoin is connected with the increased attention of regulators of different countries to this crypto currency and also with the interest from banks and investment funds.

Analysts of the agency also note that against the background of a decrease in the rate of bitcoin by 30%, the Bitcoin Cash crypto currency, which appeared in August, has risen in price. As noted by analysts, the growth of bitcoin cash was due to bitcoin. Earlier, many market participants bought bitcoin in anticipation of the Segwit2X implementation, expecting to receive additional coins. However, last week it became known about the developers' decision not to switch to the Segwit2X protocol, which would increase the speed of transactions.

Against this background, the bitcoin rate went down. Participants began to transfer funds to other crypto-currencies, and the choice fell on bitcoin cash. Bitcoin cash went around ethereum for a while, taking second place in the list of the largest crypto-currencies, but then lost again.