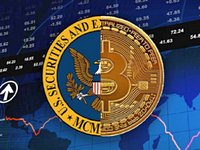 The U.S. Securities and Exchange Commission (SEC) has halted trading in the securities of Vortex Blockchain Technologies. The firm has reportedly not been filing certain periodic reports with the regulator.

In its statement, the watchdog revealed that it was temporarily suspending trading in the securities of the firm from September 23 to October 6.

“The Commission temporarily suspended trading in the securities of the foregoing company due to a lack of current and accurate information about the company because it has not filed certain periodic reports with the Commission,” the regulator said.

Following the trading suspension, brokers and dealers were warned against entering any quotation relating to Vortex’ securities. “If any broker or dealer enters any quotation which is in violation of the rule, the Commission will consider the need for prompt enforcement action,” the SEC stated.

The little-known Vortex Blockchain Technologies is a company that claims to have operations in several areas related to digital currencies. Its bread and butter is block reward mining, which the firm claims is generating $250,000 in gross monthly revenue. On its website, it projects, “If bitcoin continues to grow as projected, we forecast a cumulative valuation in excess of (2) Two Billion Dollars within 3 years (2023).”

Other sectors where Vortex claims to be involved include mining equipment manufacture, digital currency wallet and exchange and consulting. It also touts its native token, VCoin, which it claims is an upgrade on Bitcoin and is “the coin of the future.”

The firm is headed by Craig Berman, who was the political director of Ron Paul’s 2008 presidential campaign. Berman incorporated the firm in 2013 in Nevada as UA Granite Corporation and reverse merged it with Vortex Network LLC in 2018. As per the latest SEC 10-Q Report, Vortex “relies primarily upon the sale of its securities and loans from its CEO and directors to fund operations.”